When we work with pain it is really important to have the tools to zoom in and understand the minutiae of what is going on. Understanding trauma and adaptation down to a fine level in the ligaments, tendons and muscles is key and we are lucky to have great improvement in our diagnostic techniques. Using Muscle Testing we can find out the individual part of the individual muscle, ligament or part of the fascia that is causing the issue.

But sometimes when we look at an injury that has been sustained, it is important to zoom out and look at the bigger picture.

How did the damage that we have found actually occur in the first place?

A rugby player suffered a lower back injury whilst in the Scrum as a teenager. He sustained a significant injury to his L4/5 disc. He went on to have two discectomies in his early 20s. This cured the immediate pain but left him with instability in the lower back, along with sciatica down both legs.

So how did the damage occur?

As a teenage Prop playing at County Level he was playing at a high level of rugby. He was also much taller than his teammates and rivals in the Scrum.

This mean that whilst he was applying force his shoulders were much lower than hips. This was pushing the back into extension rather than allowing him an effective line of drive from Pelvis to Shoulder. It also stops him from receiving force in the same way, distributing force from Shoulder to Pelvis.

This action had created a fulcrum in his lower lumbar spine, causing the hyper extension and resultant disc injury.

This had created inhibition (neurological weakness) in the left Psoas, a powerful flexor of the Lumbar Spine and a Facilitation (neurological strengthening) of the left Quadratus Lumborum. This pattern had then lead to gradual weakening of the abdominal muscles. 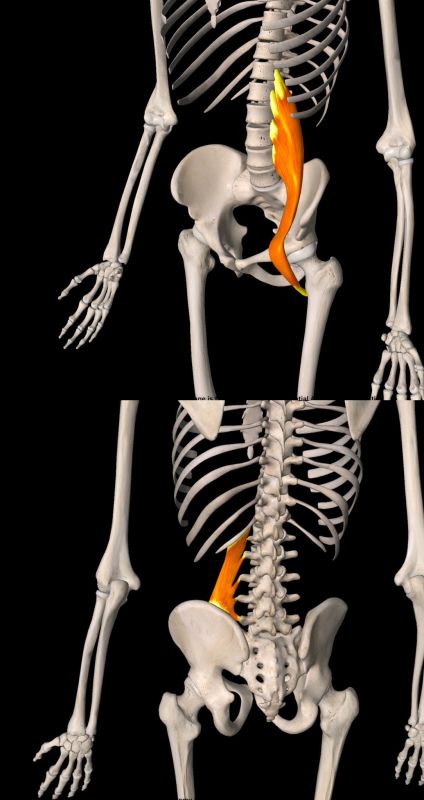 By releasing the Quadratus Lumborum and activating the Psoas we managed to clear the mechanism of the original injury and in turn, give the Abdominal muscles chance to fire correctly.

This removes that constant extension from the Lumbar Spine.

The client will then have to do exercises to strengthen the abdominal muscles to build stability in the Lumbar Spine and stop him reverting back to that habitual extension.

Don't treat the symptoms. Ask why? Why is this here? How did it happen? Why does it keep coming back? What is the linchpin?

Posted 5 years ago by Chris Adams